I haven’t gone all cultured or foody on you but who’d have thought a marine gastropod and underwater skeletons could be so beautiful?

Abalone is the common name for any kind of sea snail of the genus Haliotis – small or large, actually very large in some cases. From the outside, the shells of these wonderful creatures of the sea, are pretty unremarkable, somewhat ear-like in shape, and utilising the shells for the secondary purposes of decorative use was fairly inevitable when you see what is hidden on the inside.

Abalone, muttonshells, ear shells, ormer or Paua (Maori) have been harvested from sea shores and dived for as long as we’ve inhabited coastal areas and known the sea yields food. The flesh of these snails is still considered an edible delicacy all around the world and perhaps inevitably some areas have been over farmed and measures to protect them are now in place. A ‘sea ranch’ has been set up in Flinders Bay, Western Australia in order cater for demand, counteract human predation. 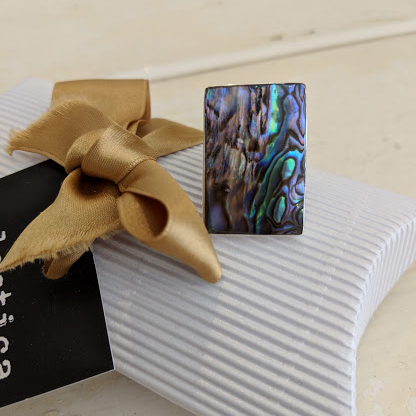 It is the thick inside layer of the shells which is desirable for jewellery making; buttons, buckles and inlaying, both on furniture and fret boards on musical instruments. This layer is made of nacre – mother-of-pearl – and in many instances is highly iridescent. Abalone shell comes in a huge spectrum of colours which appear to change as the light catches it. Most common are blues, greens and purples but reds, pinks and oranges also occur.

Cultural uses of abalone are fascinating too. Native North Americans used abalone shells as currency and Apaches use the shell as a smudge bowl to burn sage in during cleansing rituals. It was also used in the ‘Sunrise Ceremony’, a ritual to mark the change from girlhood to womanhood.

According to Apache myth, The Sunrise Ceremony celebrates the White Painted Woman who survived the great flood in an abalone shell, and came to land to be impregnated by the Sun and the Rain. The son born from her communion with rain, creates water. The son born from her communion with Sun, is the Killer of Enemies who defeats the White Painted Woman’s enemies. Victorious, she bestows a puberty rite upon all Apache women.

This is why the journey into puberty honours the White Painted Woman in the abalone disc worn on the forehead of Apache girls as they perform the ritual. Abalone meaning is one of solace, a connection to the ocean, the cycle of life, protection and ancient travel. Good eh!

For more information on healing qualities and the energy of abalone, take a looksee here

Red coral, also known as Precious coral  is the common name given to a genus of marine corals, Corallium. The distinguishing characteristic of precious corals is their durable and intensely coloured red or pink-orange skeleton, which is used for making jewellery.

Red Corals grow on the rocky sea bottom with low sedimentation, typically in dark environments—either in the depths or in dark caverns or crevices. The original species, is found mainly in the Mediterranean Sea, and likes to grow at a depth between 10-300 metres.

The same species has also been found in the caves of Alghero, Sardinia (aka the “Coral Riviera”), the Atlantic sites near the Strait of Gibraltar, at the Cape Verde Islands and off the coast of Southern Portugal. Other Corallium species are native to the western Pacific, notably around Japan and Taiwan. 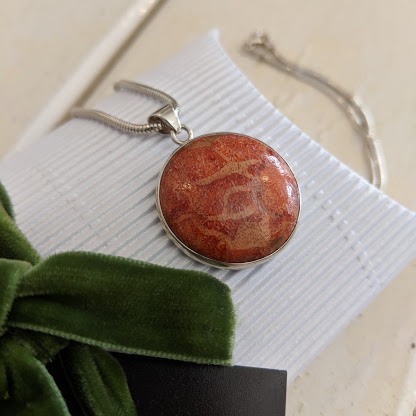 The origin of coral is explained in Greek mythology by the story of Perseus, the story goes that having petrified Cetus, the sea monster threatening Andromeda, Perseus placed Medusa’s head on the riverbank while he washed his hands. When he recovered her head, he saw that her blood had turned the seaweed into red coral. Thus, the Greek word for coral is Gorgeia, as Medusa was one of the three Gorgons.

The history of Red Coral use goes right back to the 1st millennium, when there was significant trade in coral between the Mediterranean and India, where it was highly prized as a substance believed to be endowed with mysterious sacred properties.

Pliny the Elder (yep him again!) remarks that, before the great demand from India, the Gauls used it for the ornamentation of their weapons and helmets; but by this period, so great was the Eastern demand, that it was very rarely seen even in the regions which produced it.

Among the Romans, branches of coral were hung around children’s necks to preserve them from danger from the outside, and the substance had many medicinal virtues attributed to it. The belief in coral’s potency as a charm continued throughout the Middle Ages and early in 20th century Italy it was worn as a protection from the evil eye, and by women as a cure for infertility.

It’s still believed today that Red Coral in an important healing gemstone, particularly in Ayurveda and Vedic Astrology. Due to its connection with Mars it is believed that it gives the wearer power to overcome hurdles and enemies. For more information on the healing qualities and benefits please take a look here.

The hard skeleton of red coral branches is naturally matte, but can be polished to a glassy shine, and colours range from warm reddish pink, to pale pink and deep red.  Precious coral is logged at  3.5 on the Mohs hardeness scale. Due to its softness and opacity, coral is usually cut en cabochon, or used to make beads.

Intensive fishing, particularly in shallow waters, has damaged this species along the Mediterranean coastline, where colonies at depths of less than 50 metres are much diminished. Fishing and now climate change threaten their persistence. The three oldest Mediterranean Marine Protected Areas—off the island of Corsica all host substantial populations. Since protection was established, colonies have grown in size and number at shallow and deeper depths.

Mindful of this, all the jewellery found here in eclectica in made from aquacultured or tank grown Red Coral

Gemstones appeal to all us and whether you choose them (or they you) because they’ll aid your spirituality or whether you just like the colour, shape and style. We have a lovely, carefully chosen selection for you to browse here in t’shop or on our website.

We’ll leave the parting words to the ‘Queen of Jewels’ – Elizabeth Taylor:
“Jewellery has the power to be one little thing that makes you feel unique”
Categories: Jewellery
Tags: abalonecoralgemstonemother of pearlprecious coralred coralshell