One of the best bits about being in our little shop for me (Vicki) is all the stunning jewellery and the silver and gemstone jewellery especially.

Whatever your thoughts on the power of gemstones, I certainly feel positive vibes when handling stones and gain huge pleasure when just looking through the cabinets each day.

I have my favourites such as amber, which we’ll probably always have a goodly selection of….but it’s also very exciting when we find a stone new to us. We select purely on beauty and then do some research once we receive them here. There are some great histories and stories around the origin, use and power of certain stones and I’ve selected a few of our new ones to fill you in on…

We have found some beautiful Super Seven silver rings for you which are a semi-transparent purple with flecks of gold and rutile through them. As the name suggests, this crystal is a combination stone, comprising of Amethyst, Rutile, Clear Quartz, Smoky Quartz, Cacoxenite, Goethite and Lepidocrocite.

As it shares all of the metaphysical and healing qualities of each of these mineral elements it is a very powerful crystal and is regarded as a stone of ‘higher consciousness’.

Described by some as a psychic power station as it veritably buzzes with energy, Super Seven is a relatively rare stone only found in the Espirito Santo region of Brazil.

The appearance of the stone varies depending on the balance of each of the individual components but is generally a purple hue, sometimes very dark in colour, sometimes almost transparent and with inclusions of pink and gold. When polished, it makes for very attractive jewellery that synergystically creates a healing influence greater than its parts. 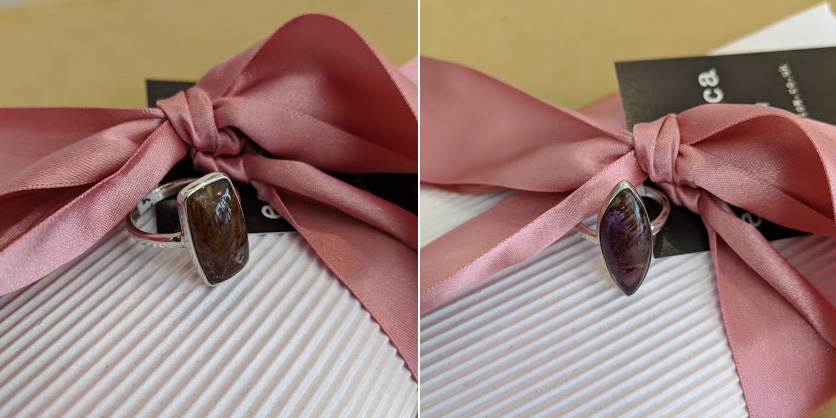 Blue Goldstone is non natural/man-made and it polishes up to a highly glossy surface filled with what look like tiny pinpricks of stars in a night sky. It’s actually glass and Goldstone comes in varying colours depending on the mineral elements. Red Goldstone is copper based, whereas in Blue Goldstone the copper is replaced by cobalt or manganese to give the base blue or purplish colour with silvery flecks. Chemical reactions take place when all of the ‘ingredients’ are placed in a low oxygen reducing atmosphere & then Hey Presto! At some point later an enchanting shimmering glass is the result.

Although it’s man-made it seems it’s been around for a good while and origins point to 12th-13th century Persia as a goldstone amulet, now housed in the University of Pennsylvania is said to have come from there. It was also produced by the Miotti family in 17th century Venice. Seems we’ve always been partial to particularly shiny things, especially something that reminds us of the heavens!

For those who are interested in the meaning/healing qualities of goldstone, take a peek here. 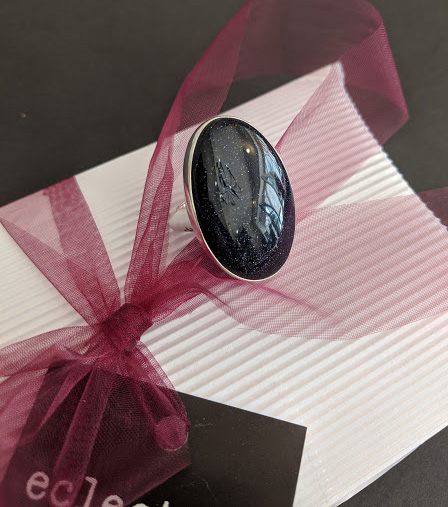 The name ‘Jasper’ means speckled or spotted stone and derives from the old French jaspre. It is known to have been a favourite stone of the ancients and on Minoan Crete jasper was used to carve seals circa 1800 BC. Its name can be traced back to Hebrew, Latin, Arabic, Assyrian and Greek although the ancients may have included other gems now differently classified, as jasper.

Red Jasper is most common and is a type of opaque Quartz containing iron inclusions, which give it its red colour. Mineral content thought to be deposited by hydrothermal circulation forms in many and varying patterns and there are a host of different classifications depending on where the stone is located and its patternation, with some defined as ‘picture jasper’ as cut stones seem to depict scenes.

We have a particularly beautiful example of ‘brecciated‘ or broken red jasper set into a silver ring. Its colour is not a bright red but more of a deep dark burnt red with swirls of darker mineral content ranging across it like an abstract painting. It’s a super statement piece.

In Teutonic legend, Dragon Slayer & ill-fated lover of Brunhild, Siegfried, had his magical sword hilt inlaid with red jasper for courage, strength and endurance. North American Indians refer to red jasper as ‘the blood of Mother Earth’ and associate it with sustaining health and re-birth. Renown as a talisman of warriors, Mark Anthony is said to have used a red jasper to seal his letters to Cleopatra. This also ties in with it being a highly sexually charged stone, enlivening kundalini energy of the sacral and base chakras. 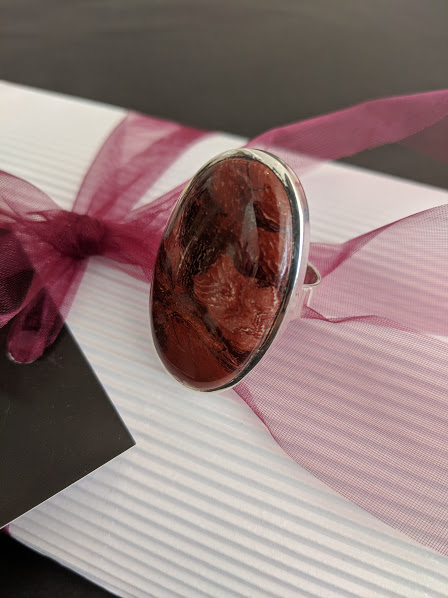 There’s a lovely story behind the naming of this gorgeous blue, violet type of zoisite. It was actually given the name Tanzanite by the Tiffany & Co marketing department and their tag line was “Tanzanite can only be found in two places; Tanzania and Tiffany’s!”

A relative newcomer as a gemstone, it was first discovered in 1967 in the Manyara region of Northern Tanzania, not far from Arusha and Mt Kilimanjaro.

In its natural state it usually contains a brownish ‘veil’ which is now commonly removed by heat treatment, which makes the blue & violet hues cleaner and clearer.

The American Gem Trade Association were obviously also very taken with tanzanite too as they changed their December birthstone to Tanzanite in 2002, the first amendment since 1912.

As it’s purple-ish it’s naturally one of my favourite shinies!
When we found some we opted for some square cut pieces for pendant, dangle earrings and ring. The square is offset which give them a lovely contemporary and sophisticated stylish look.

It has the same wonderful clarity of sapphire – a really eye-catching sparkle, which does indeed look very Tiffany’s but thankfully, not at Tiffany’s prices!