Sapphire is a variety of the mineral corundum – pretty much as tough as it comes clocking it at a 9 on the mohs hardness scale & classed as a precious gemstone. It is a beautiful and durable gem for jewellery. Typically we think of sapphires as blue and some of the world’s most stunning examples have an almost blue fire within. It is also found in pink, yellow, orange, purple and green too and these are known as ‘fancy’ sapphires.

There are some lovely stones displaying two or more colours, known as ‘parti’ sapphires. You won’t find a red one though as you may recall red corundum is also know as ruby, July’s birthstone. So, you lucky September birthday people, you have a choice of colour with your birthstone. 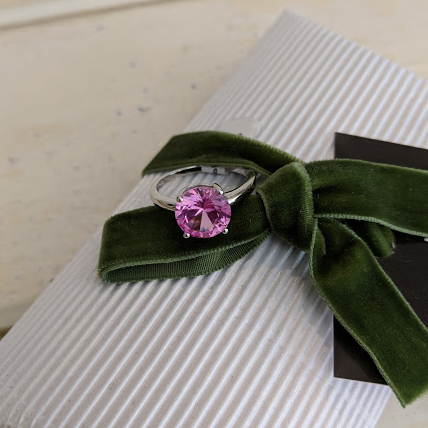 There is even a type of sapphire that contains a six rayed star pattern or asterism. These star sapphires tend to be cut ‘en cabochon‘ rather than faceted so the inclusions of rutile and platelets of hematite show up as a shining white star within the stone. When stones are found with two lots of inclusions they form two six rayed stars superimposed upon one another and are called star sapphires or cat’s eye sapphires, depending on how the stone is cut.

Padparadscha sapphires, originally found in Sri Lanka and so called as they resemble the colour of the lotus flower (from the Sanskrit padma=lotus & ranga = colour) are the most rare and these orangey-pink gems can command higher prices than even the best of blue sapphires. However, recent developments in artificial treatments to change the colour of gemstones has meant an increase of these onto the market.

Sapphires are found worldwide and as each mine produces a variety in quality of stones, geographical source location is no guarantee of high quality. Naturally occurring sapphires are assessed for quality based on colour, size, clarity and cut. It is also worth noting that there are many synthetic sapphires produced too. These are much more affordable, just as beautiful and contain the same chemical makeup as a natural stone. So, there is also a choice of budget if buying sapphire for a September birthday gift.

It won’t surprise you, our wonderful eclecticats, that here in eclectica we got our hands on a collection of fancy sapphires! We simply couldn’t resist the sparkly beauty of the pink sapphire.