Peridot is a green semi-precious mineral & variety of Olivine, & Jodie’s favourite gemstone, so she rues the fact she is not August born!  It’s also one of the rare gemstones that occurs in one colour only – a striking olive green.

The appearance of the stone does depend on the percentage of iron in the crystal structure and there are often tints of yellow and/or brown within stones. There is debate amongst gemologists and historians that the emeralds so famously worn by Cleopatra, were in fact peridots, as the earliest known mining of the stones was 1500 BC on Topazo Island, now Zabargad in the Egyptian Red Sea. 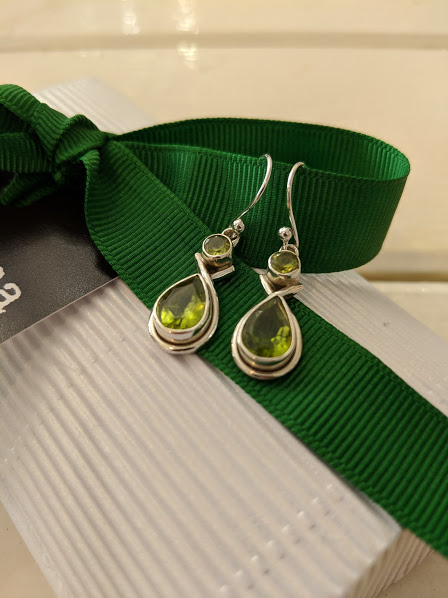 The stone continued to be mined in Egypt for 3500 years and has a long written history, as the national gem of Egypt & was known as “The gem of the sun” by ancient Egyptians. In times gone by, both Egypt and Burma (now Myanmar) produced peridots of a much darker green than we tend to see nowadays and as a result these darker stones are much more valuable.

Whilst olivine is relatively abundant, gem quality peridot is really rather rare. Today it is predominantly mined in parts of the U.S, Australia, Brazil and China.

The largest cut olivine peridot is on display in the Smithsonian Museum, Washington D.C and is 310 carats (62g).  To compare – the gems found today average only around 3 carats each.

At 6.5-7 on the mohs hardness scale, peridot does need some TLC, especially if set in a ring. It can lose its lustre & naturally ‘oily’ sheen if exposed to extreme temperatures and will scratch too, if knocked about. When cleaning, we recommend that you use warm soapy water & avoid chemicals and ultrasonic and steam cleaners.

As a gemstone used in jewellery, religious relics and all manner of decorative purposes for thousands of years, peridot has acquired its own mythologies; such as if set in gold it becomes a powerful talisman to dispel bad dreams and night terrors. Pliny the Elder, Roman authority on such matters, insisted it attained its full power whilst worn on the right arm…Also, ‘ tis said to ward off the evil eye, aid friendships, bring happiness & good cheer and free the mind of envious thoughts.

It is thought that peridot fosters emotional balance, security, and inner peace. It soothes nervousness, heals emotional and physical pain, and lightens suffering. Because it is calming to the nervous system, peridot is also claimed to be useful in promoting sleep.  It has been claimed that the stone sharpens the mind and opens it to new levels of awareness.

Lastly it is thought that Peridot opens, cleanses and activates the heart, which can help one to release old baggage; all burdens, guilt and obsessions become cleared and a new psychological clarity and feeling of well-being begin.

All sound good eh! Sounds like we should all have some peridot jewellery!  I can’t think why I haven’t got any yet  – especially as green is my favourite colour!