Got a November birthday? Those lucky folk have two of the most beautiful gemstones as birthstones – Topaz and Citrine.

Lets take a look at topaz first;  it’s as tough as old boots – clocking in at 8 on the mohs scale of hardness! It comes in an array of gorgeous sparkling colours so it’s no wonder that it has been used in jewellery making and for intaglios and other decorative purposes for thousands of years.

Although topaz has a wonderful clarity or transparency, larger cut gems lack the brilliance of other hard minerals like diamonds and it is smaller pieces, cut and faceted that really shine.

Traditionally it is orange topaz, also known as Precious Topaz, that is associated with November birthstone. Exclusively mined at Topaz Mountain in Utah, U.S.A, it is the Utah state gemstone.

In its raw state, topaz is golden brown to yellow in colour and it is impurities and treatments which alter the colour. There is a naturally occurring blue variety although this is quite rare. There are also red and pink varieties when the normally occurring aluminium in its composition is replaced by chromium.

Imperial Topaz is yellow, pink or an orangey pink. If natural stones are pale in colouration they are commonly heat treated to darken or intensify their colour. Here at eclectica we stock the funky looking and named Mystic Topaz, which is actually transparent topaz that has been coated in order to produce a magical rainbow effect, which makes an unusual and wonderfully eye-catching gemstone. Jode’s calls it the disco stone! One things for sure – with it’s rainbow of colours it complements every outfit and is a useful addition to your jewellery box.

Whilst topaz is hard, jewellery items should be treated with some care as due to weak atom bonding, they will fracture if struck with sufficient force. 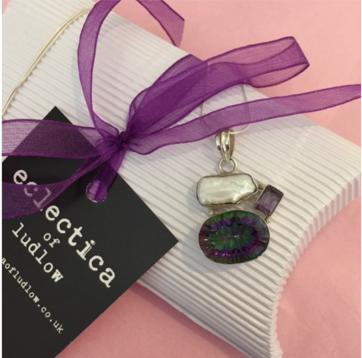 Often confused with topaz is it’s sister stone citrine – this is probably because of the colour. Yellow topaz and citrine are rather difficult to differentiate by the naked eye but do differ in hardness.

Citrine is a form of yellow quartz and naturally occurring citrine is actually quite rare. Mainly found in Brazil, natural stones can exhibit a cloudiness or smokeyness. Often gemstones sold as citrine’s are heat treated amethysts or smokey quartz. None of this should detract from good pieces of jewellery though!

Sometimes, amethyst and citrine are found within the same crystal structure and this is known as ametrine, a really lovely combination stone. Citrine, deriving its name from citrina, the Latin for yellow, is a vibrant fresh yellow stone, just like the citrus lemon.

In the past it has been referred to as the Merchant’s Stone or the Money Stone as it was thought it attracted prosperity. Amusingly, topaz was thought to have been a cure for lunacy! It never ceases to fascinate me the properties attached to gemstones even if we buy them and wear them nowadays based on no more than their beautiful appearance. We do find it interesting how some people are drawn to certain stones though. 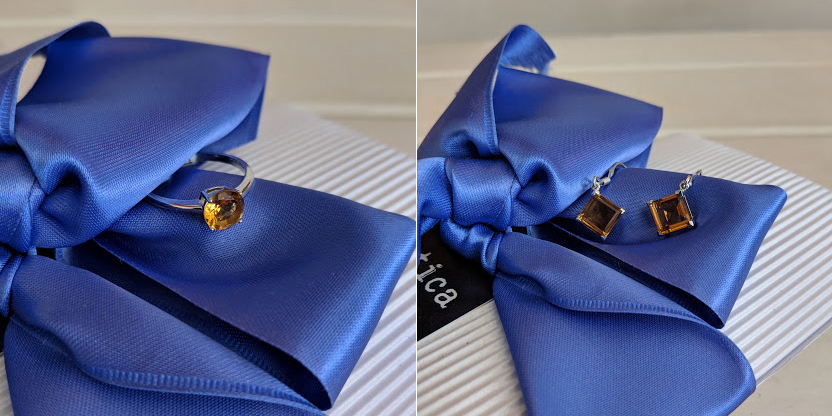