The colour of the Sunny Caribbean Sea & Skies, Larimar is unique to The Dominican Republic. Traditionally thought to have emanated from the sea itself as it was found on the South East coast of The Dominican Republic near the sea-shore. This may tie in with the story that the Lost city of Atlantis is nearby and mythologies about this beautiful gemstone have grown, with claims it aids spirituality and engenders calmness.

Its geology is fascinating because it has only been found in one location in the world. It is a blue coloured variety of the mineral pectolite, which is found all over. However, the usual sodium/calcium combination of pectolite is altered in volcanic Larimar, with the calcium content substituted by copper. It does also present with other colour variations but it is the blue/blue-white colouration most associated with Larimar in jewellery making. 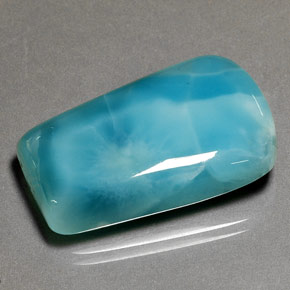 Its colour is not solid but an opaque, marbling blend of blues and whites – like clouds in the sky. The deeper the blue and more marked the contrast, the more valuable the stone – Although, often the lighter blues are more visually attractive. It’s not as hard as some other gemstones (4.5-5 on Mohs scale) and should be kept away from other pieces where it might get scratched or marked.  Care should be taken, especially with rings. It’s best washed in warm soapy water, rinsed in clear warm water and harsh chemicals should be avoided at all costs. Dry with a soft cloth and put somewhere warm to dry thoroughly. Note though, the colour will fade if left in bright sunlight or exposed to too much heat. 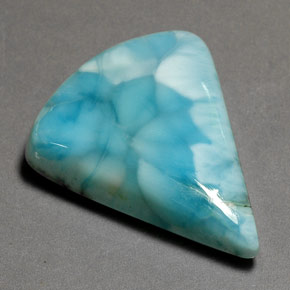 It’s also known as ‘Stefilia’s Stone’, although I haven’t been able to ascertain why! (answers on a postcard please…or via comments on here or on our FB page) It is known as Larimar though after a daughter of one of its finders – ‘Larissa’ & this combined with the Spanish for sea ‘Mar’ & you get Larimar! It’s a rare treat to find some nice pieces and we treated ourselves (YOU actually!) on our recent visit to The Spring Fair. Take a peek on our website or if you’re in Ludlow – pop into the shop!